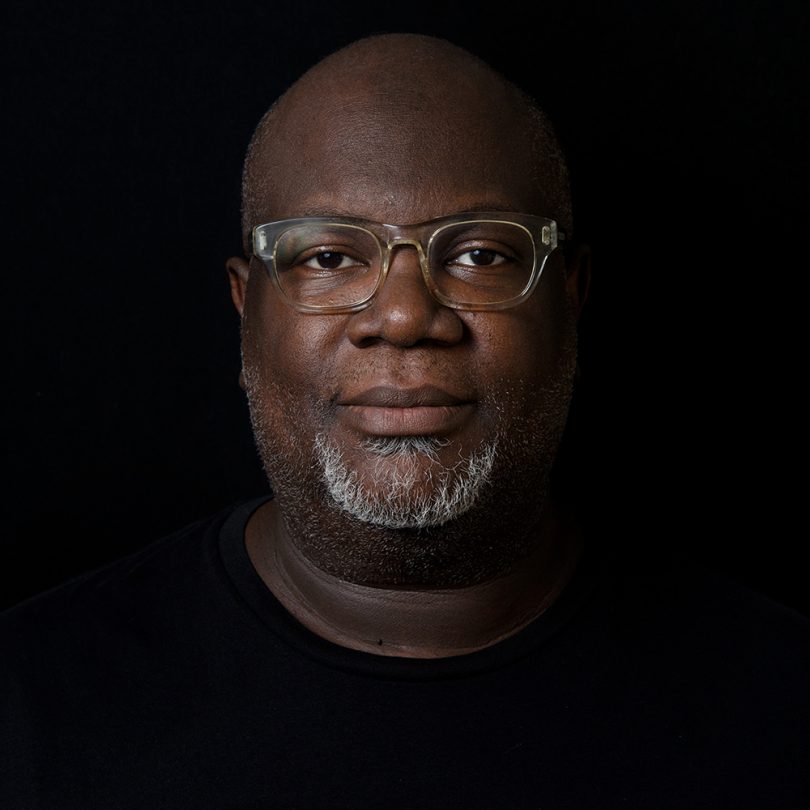 As Principal at New York City-based Jaklitsch/Gardner Architects, Mark Gardner has led many of the firm’s design initiatives and works to understand the role of design as social practice. Gardner takes a serious interest in the crossroads of architecture and art, both subjects of the utmost importance to his professional practice as well as to his teaching and writings. Mark is committed to practicing architecture as a socially beneficial art form. He’s engaged in all aspects of each of the studio’s projects, and leads the firm’s quality-control review process, having taught Professional Practice at the University of Pennsylvania. Mark is currently the Director of the Master of Architecture program at Parsons. Today Mark joins us for Friday Five! 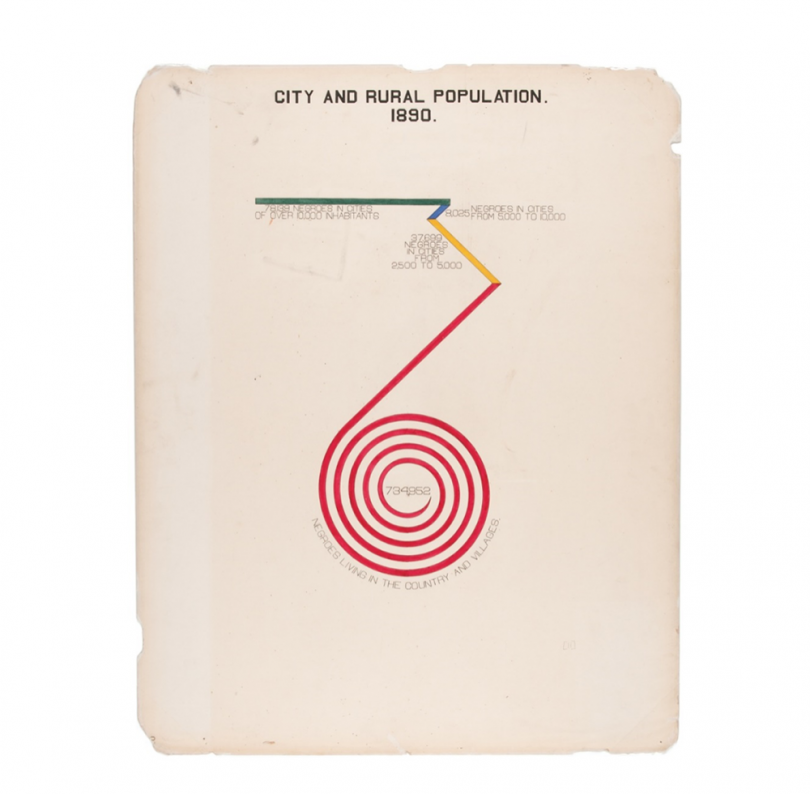 1. W.E.B. Du Bois Mapping Diagrams
In 1897, the United States Supreme Court ruled in Plessy v. Ferguson that separate was equal. W.E.B. Du Bois, the prominent African-American intellectual, was documenting the African-American Community at the same time as the case. He presented a mixed picture about the state of racial progress in the country. African-Americans faced the failure of Reconstruction to be brought to completion and the coming decades of Jim Crow. Despite discrimination, a new generation of African-Americans found ways to uplift themselves, through grassroots efforts in education and business.

”It is not one problem,” as Du Bois wrote in 1898, “but rather a plexus of social problems, some new, some old, some simple, some complex; and these problems have their one bond of unity in the act that they group themselves above those Africans whom two centuries of slave-trading brought into the land.” After graduating with a Ph.D. in history from Harvard University, Du Bois sought a way to process all of this information showing why the African diaspora in America was being held back in a tangible and illustrative form. 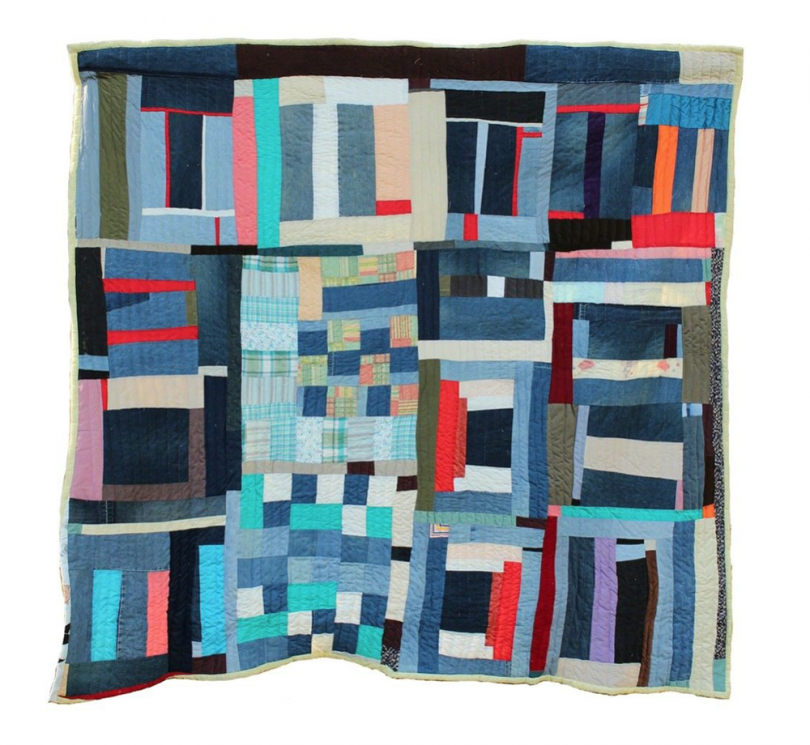 2. Gee’s Bend Quilts
As the Alabama River flows south, it meanders in a series of bends. And about 30 miles from Selma, one of those bends forms an isolated peninsula, which is filled by the hamlet of Gee’s Bend. Gee’s Bend (now also known as Boykin) is home to generations of African-American families whose ancestors were brought to the area as slaves, back when the South was covered in plantations. The women of Gee’s Bend have created a conclave of makers, quilters that are recognized globally and they have made their mark in the Art World. 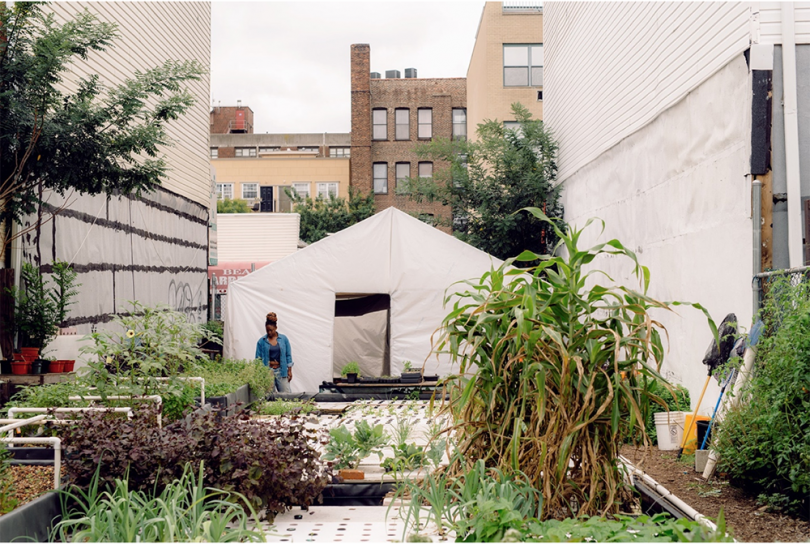 3. Urban Farming
One thing the Pandemic has taught me is the need for nature. Taking the response a bit further is the need to grow our own food. I have been working with our Parsons Design Workshop and OKO Farms to create an Urban Farm that filled a community need in Weeksville, Brooklyn. There are quite a few food deserts across the Metropolitan area. They result in correlated areas of poor health, obesity, diabetes and heart disease. The Community Garden movement has existed for decades in New York City, and a new movement in food growing has filled once derelict Urban Spaces, open lots and old warehouse roofs. 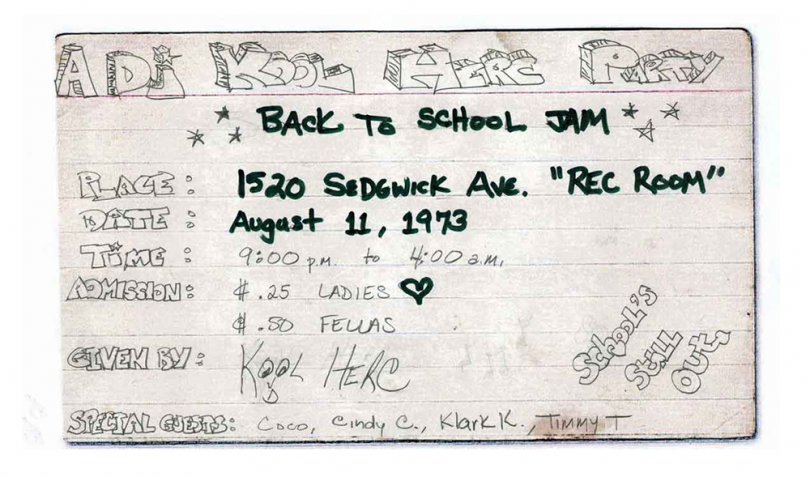 Photo via The Source

4. 1520 Sedgwick Avenue
August 11, 1973 can be considered the beginning of the Hip Hop history timeline. What was intended to be an end of summer party at 1520 Sedgwick Ave in the Bronx ending up being ground zero for one of the most important musical phenomenon of the century, the birth of Hip Hop. The building is typical of NYCHA Housing, nothing extraordinary. But it is a famous address for what happened there that Summer in the rec room.

The event was a back-to-school party in the first floor rec room of the Bronx apartment building. Cindy C. booked her 16-year-old, Clive aka DJ Kool Herc, to spin the decks and the date was set. Hand-drawn index flashcard fliers were handed out all over the city advertising “A Kool Herc Party” with a $.25 cover for the ladies and a whopping $.50 for any fellas looking to have a good time. When the night of the event came, 300 people showed up. 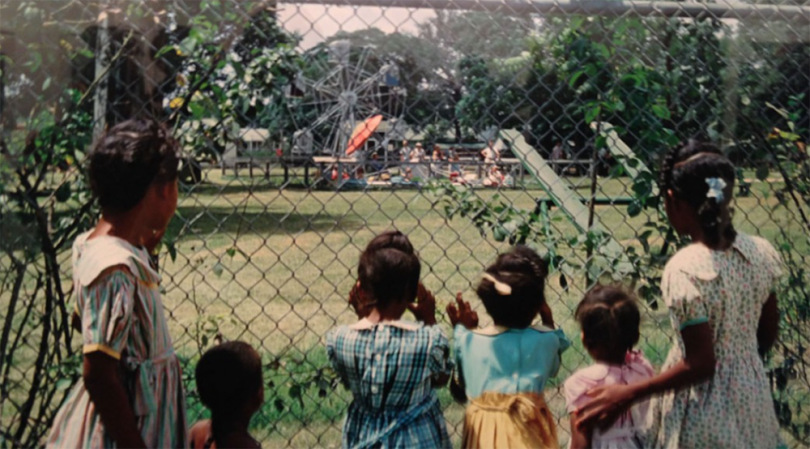 5. Gordon Parks
Gordon Parks’ “Segregation Story,” a series of photographs that was first published in Life magazine in 1956. It was controversial because it forced people to view segregation and racial inequality from a different perspective – that of the oppressed. In the photo, six black children face a chainlink fence, peering at a park on the opposite side. Because of segregation we, the viewer, join them as they longingly gaze at the green park and its white occupants. 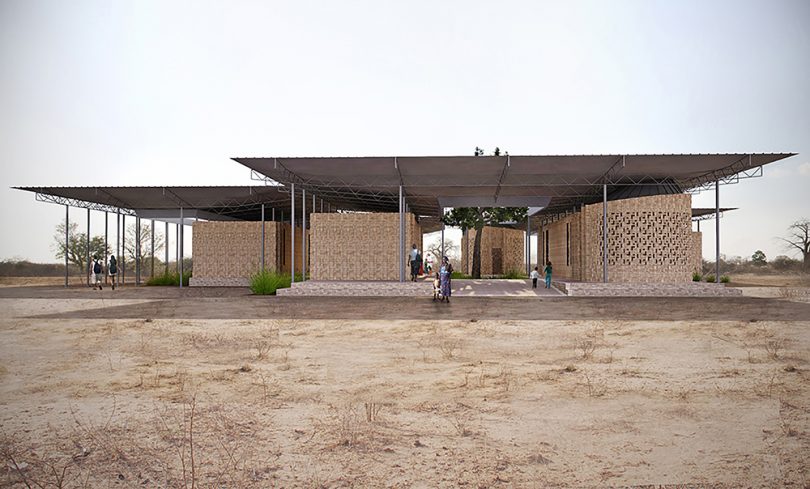 The design of the sanctuary fosters a sense of community, collaboration, and improvement through informal and formal spaces for interaction. The facilities are organized in a cellular-patterned structure around garden courts providing a framework for future expansion, as well as spaces for informal interaction and learning. Construction is being divided into three core phases; phase one will include spaces for education, honey – harvesting and a market.

Partnering with Follow the Honey, National Beekeeping Supplies and Nyuki Safari Company – three organizations devoted to sustainable beekeeping and economic development opportunities – to work with local beekeepers, consultants, and a group of dedicated and passionate individuals alongside the Tanzanian government, to decentralize and support local beekeeping activities. 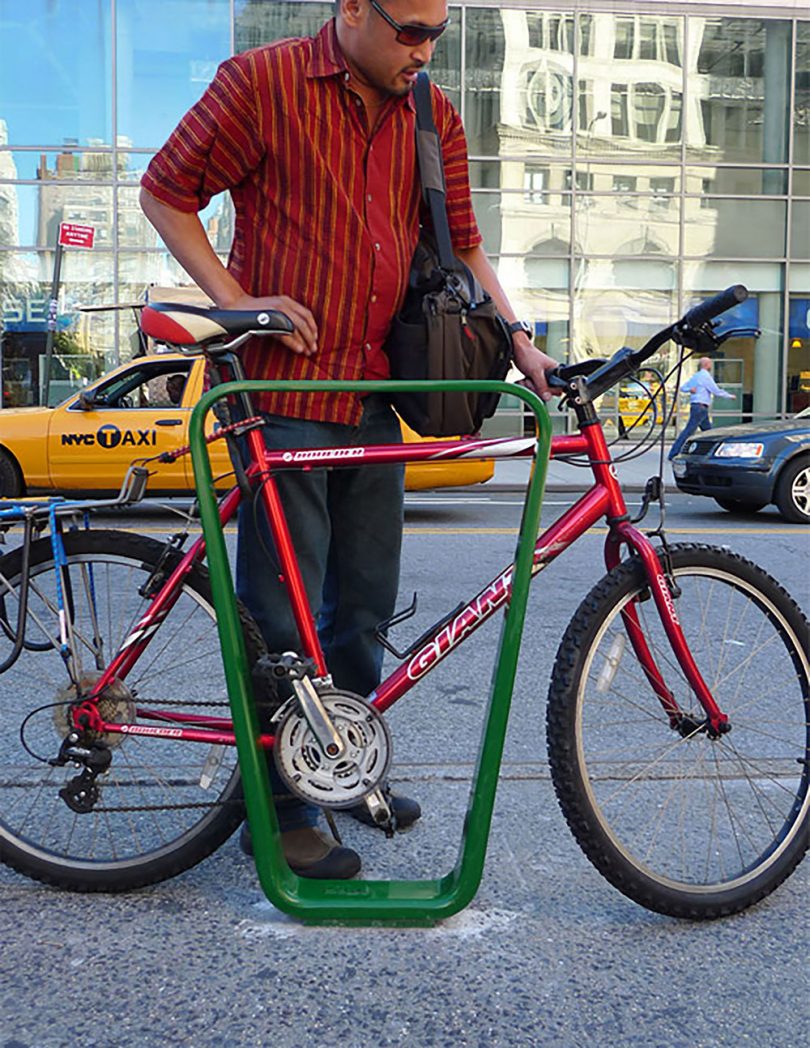 A finalist in New York’s City Racks Design Competition, the Bike Rack is an innovative and iconic fixture conceived to enhance bicycle parking throughout the City of New York.

Made from durable die-cast aluminum alloy, the rack was designed to be both versatile and sustainable. The small footprint and slim profile allow the rack to fit into a variety of urban site conditions while the unique shape allows the rack to be mounted on any side to accommodate a range of bicycle sizes. A single point of connection makes the racks easy to install and maintain. 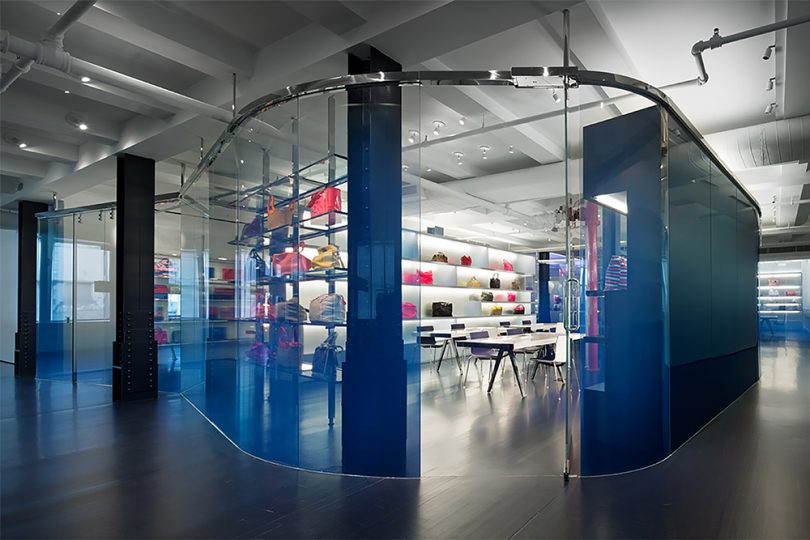 The Marc by Marc Jacobs showroom is housed within a full floor of Marc Jacobs’ Manhattan headquarters. With offices along the north perimeter, limited exposures from two south-facing windows and a large expanse with western exposure, the challenge was to maximize the use of daylight while creating meeting spaces of relative privacy and acoustical control. The design employs a curvilinear glass form as the central organizing element and opaque display fixtures arranged perpendicular to the west-facing windows. The shape of the glass enclosure responds to both the program as well as the structural conditions of the building. The glass is imprinted with a gradient frit to create a subtle visual screening that affords visual privacy for seated guests while providing standing visitors sweeping views of the full showroom.