eVolo magazine announces the winners of the 2020 skyscraper competition. out of 473 projects received, the jury selected 3 winners and 22 honorable mentions. initiated in 2006, the annual award recognizes visionary ideas that challenge the way we understand vertical architecture, and its relationship with its surrounding contexts. while the collection of visionary fictional towers address a range of environmental, social, and political concerns, the first place entry addresses the current COVID-19 crisis, envisioning a rapid-deployment healthcare skyscraper for epidemic outbreaks. 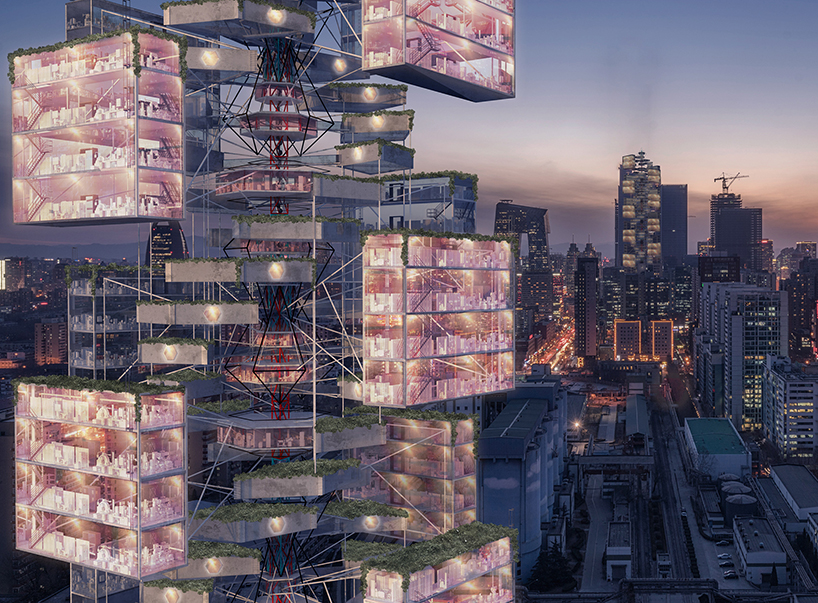 first place winners of the eVolo 2020 skyscraper competition present their rapid-deployment ‘epidemic babel’ health care skyscraper in response to the current coronavirus pandemic. the team writes: ‘the project takes into consideration that an epidemic outbreak is usually fast, leaving no time for governments and policymakers to react. under these harsh circumstances, a weak healthcare infrastructure will soon be torn apart turning the epidemic into a deadly catastrophe… the epidemic babel features two very important advantages: simple construction and rapid response. the entire building consists of a steel frame with several functional boxes with a very small footprint. the building pattern is simple enough that any qualified construction team can have it ready in five days.’ 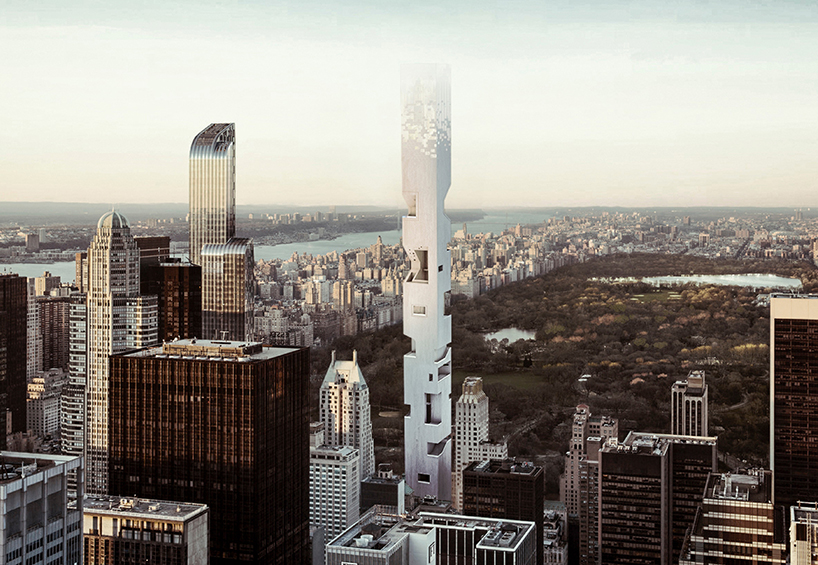 with the egalitarian nature skyscraper, second place winners propose a new building typology which satisfies the human need for nature rather than capital. the team elaborates: ‘it is a new kind of infrastructure conceived to serve the whole society. the traditional skyscraper is reimagined as a mountain range that provides a new way to experience nature within an urban environment. a zigzag-climbing path is developed along with abstract spaces that encourage an unexpected engagement between people and nature. accessing the tower is not decided by capital but individual physical strength.’ 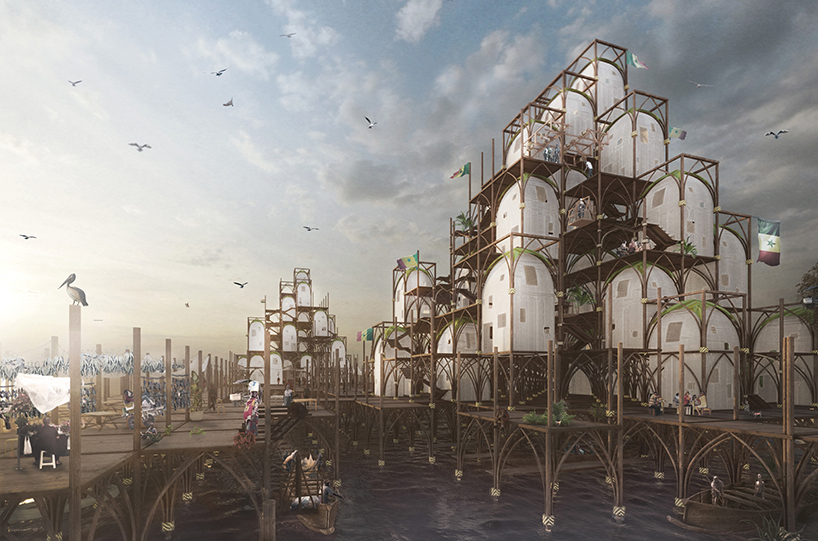 third place winners of the eVolo 2020 skyscraper competition site their proposed ‘coast breakwater’ skyscraper within a hostile territory of senegal affected by rising floodwaters. the designers write: ‘there are constant confrontations with the neighboring countries regarding the established fishing boundaries and territories. in addition… the region is affected by the rising sea level. such natural phenomenon has forced the community to move inland, away from the shore. this proposal is based on traditional pillar structures, which are used to prevent erosion. these structures will serve as a foundation for the new vertical housing units. the project is also inspired by senegal’s traditional wooden architecture that uses a complex arch system with tensile structures.’ 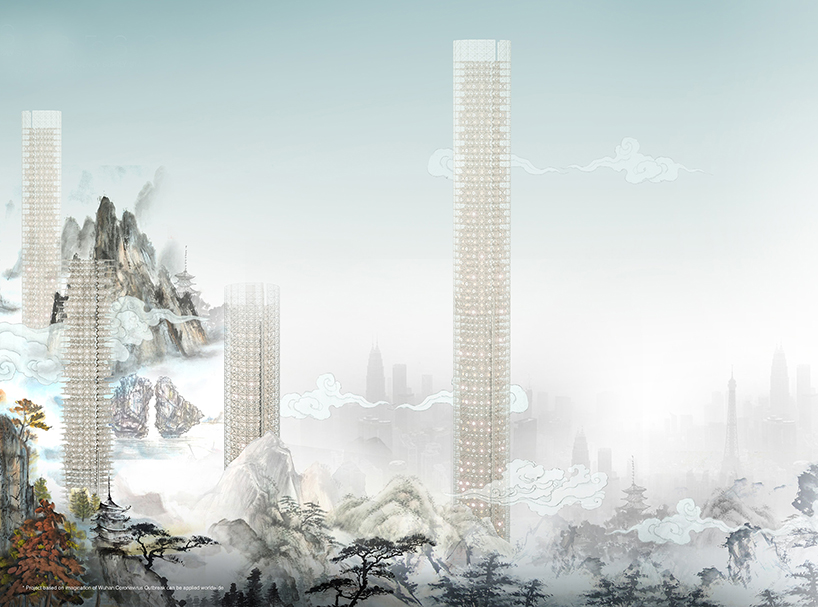 the team behind the pandemic emergency skyscraper envisions an urgent supply station designed to overcome a sudden and rapidly growing virus outbreak. the designers explain: ‘its main function will be to fill in the inadequate hospital resources… especially, to meet the emergency requirement, the building has to use modularization technology in order to be assembled in a very short time. vertically configured buildings facilitate more efficient infrastructure in case metropole, where occurs primarily the most case of a pandemic outbreak. this emergency supply station is capable of adapting to many terrains, especially in areas with poorly prepared for an epidemic, such as africa, asia, south america.’ 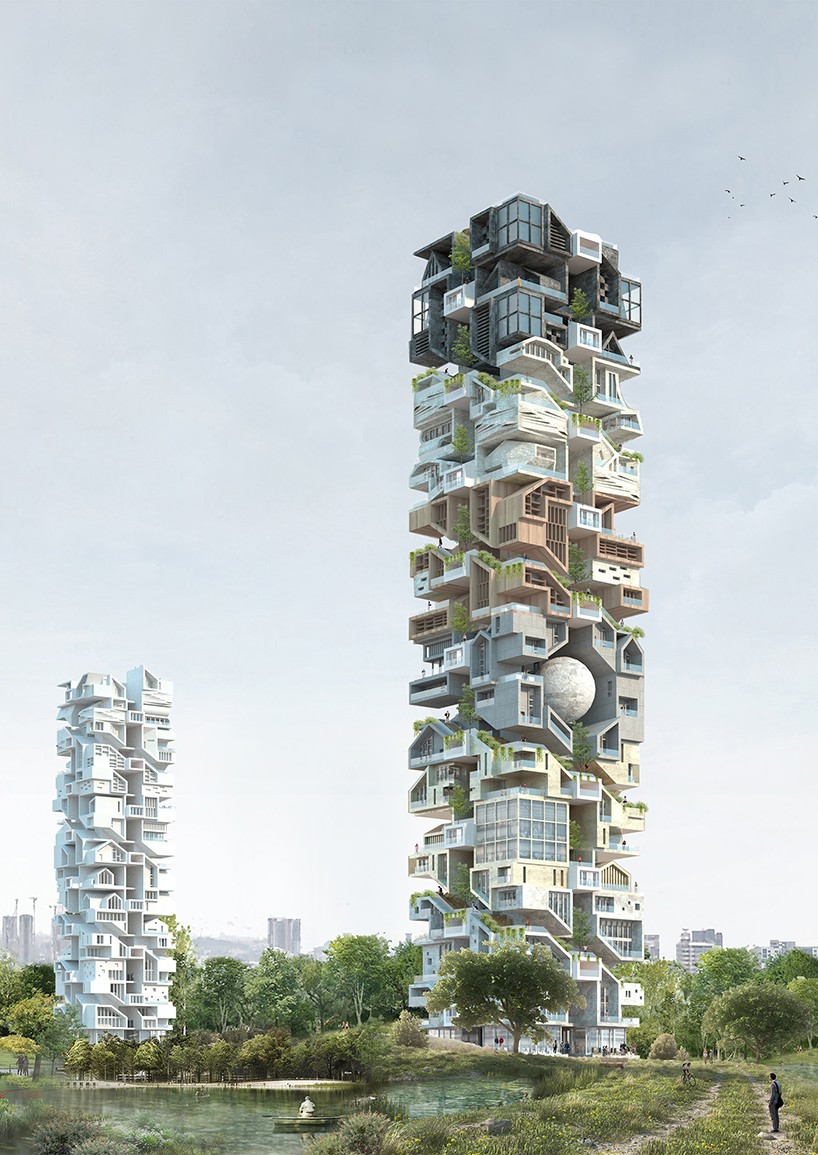 the design team behind ‘tesseract’ proposes a system that allows residents to participate in the design of their own units as well as the programs and facilities within the building itself. the team writes: ‘this process is inserted between the time of purchase for the unit and the total time required to complete construction — a period that is often ignored and neglected. through this process, residents are allowed to choose their amenities and their communities, enhancing their sense of belonging in the process. housing units will no longer be stacked in repetition with no relation whatsoever to the residents living in it — a sentimental bond between housing and men results.’ 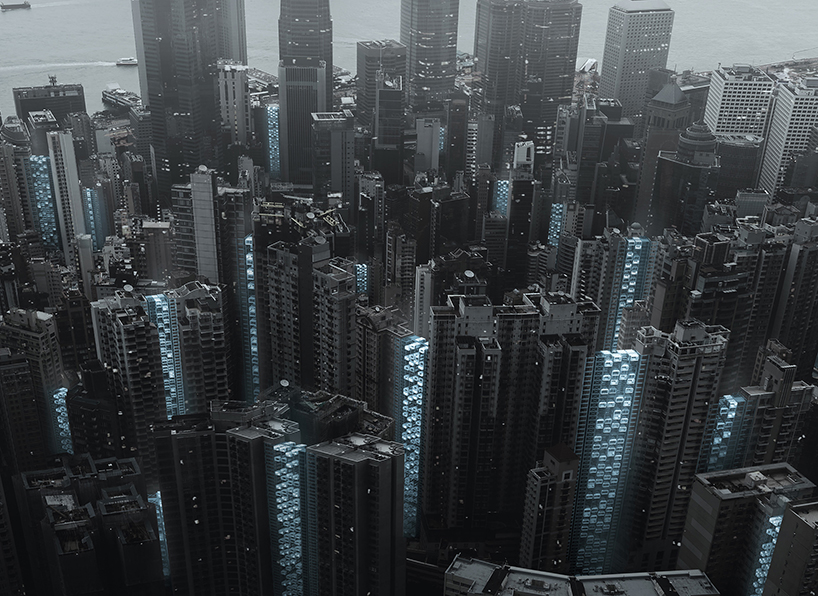 designers of the ‘fill the gap’ skyscraper imagine a solution to the unimaginable living conditions of the ‘coffin rooms’ and cage houses’ of hong kong. the team explains: ‘in order to increase land use and improve people’s quality of life, there seems to be another possibility in hong kong — the use of gap space between residential buildings. using the gap space can expand a lot of space, and at the same time, it can solve the above problems perfectly without affecting the normal social order… the supporting structure in the gap adopts the folding steel frame structure, which has the advantages of high strength, lightweight, simple fabrication and fast construction period. 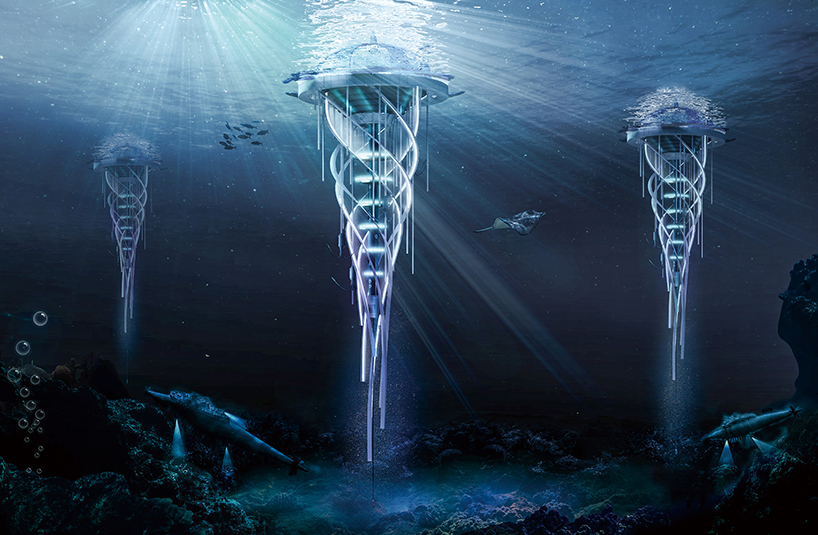 designers of the drilling water-scraper address the dangerous amounts of marine waste along with the recent discovery of clean, energy combustible ice in the deep sea. the team writes: ‘we come up with the idea of using local materials, turning plastic waste into 3d-printed materials, as our own building materials… we take the place with the highest coincidence of combustible ice and marine waste as the building site. there are two main moving lines in the building, the downward materials, and the upward energy. among them, the energy tower transforms the plastic waste on the sea into 3D printing materials, and prints the building and energy tank down along the core cylinder, turning itself into a building with growth.’ 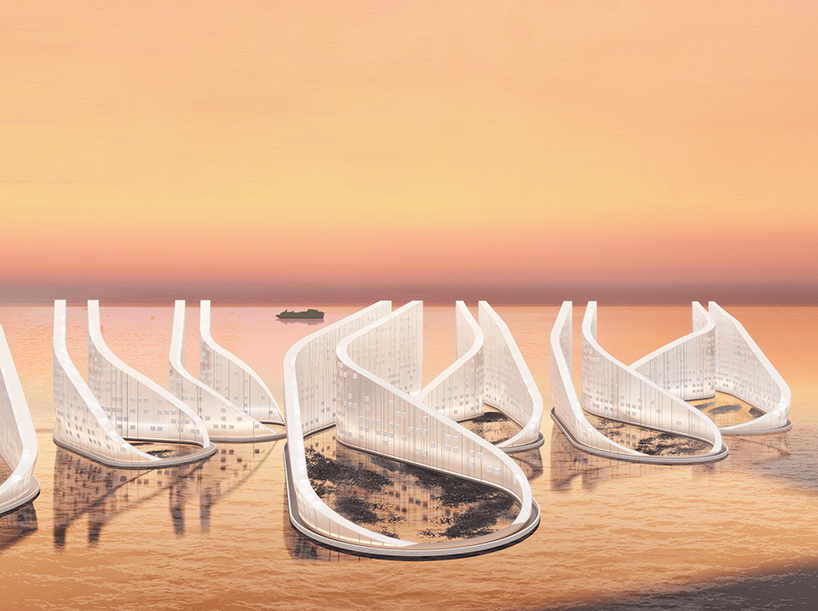 the team seeks to address global climate change and rising sea-levels which see people losing their land and animals are losing their homes. for the 2020 eVolo skyscraper competition, the designers write: ‘the design is based in kiribati, an island country in the south pacific… its territory is thought likely to disappear within the next 60 years. the design proposes to constructs a series of wall-like skyscrapers in the offshore waters… by studying the erosion of the coast and the direction of the ocean currents, the design of the architectural massing is used to slow down the speed of the ocean currents flowing around the building. With such a method, the sand and mud in the water are able to deposit as sediment and gradually cultivate the new islands over time.’ 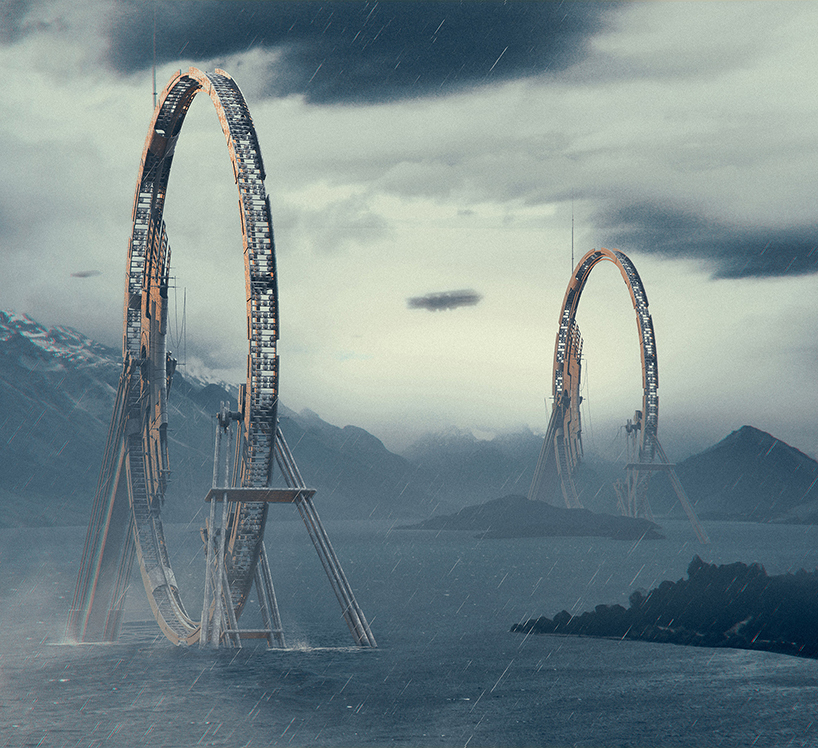 the team behind the mudtrapper skyscraper seeks to naturally exploit otherwise disastrous flooding by removing its destructive qualities. the team elaborates: ‘generally, the destructive and antithesis issue in the flood is the existence of garbage, mud and the aquatic, which enter the residential areas by the pressure of the water. by placing the tower in the path of the flood, the animals are first rescued, then the garbage in the flood is removed, and finally, the mud enters the tower area with the flood and the exploitation operation begins… the flood, passing through the confines of the tower, is converted to a calm, refined stream which has used its destructive power to produce material and help its process, and then continues on its way.’ 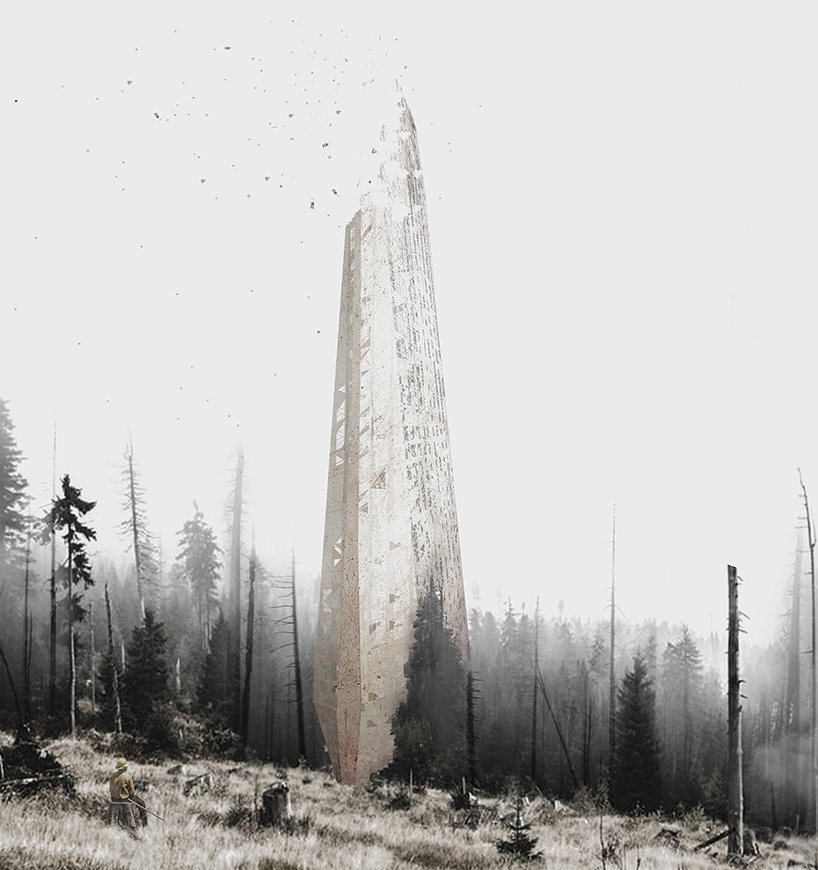 for the 2020 eVolo skyscraper competition, the regenera skyscraper is designed to serve as a tool for forest regrowth, which gradually dissolves as the forest regenerates. the designers write: ‘the project aims to spread nutrients and seeds through winds and to be a temporary shelter for birds and small size animals. the skyscraper will accompany its ecosystem during all the phases, from the burnt forest until the total recovery. it is through the erosion of its own structure and consequently through its dissolution that regera can transform and spread itself into the ecosystem. during the initial phases, a laboratory on the lower level is dedicated to experiment, monitor and research the ongoing process and the ecosystem progresses. in the following phases, the scientists abandon the skyscraper allowing the re-population of small and medium-size animals and plants.’